It may be hard to remember, but before the iPhone and the modern era of Apple1 Apple made computers not of highly recyclable BFR-, PVC-, and beryllium-free, low-carbon aluminum and glass, but of that boogeyman of our more environmentally-conscious world, acrylic plastic. It was with acrylic that Jony Ive first made his mark at Apple, and it was acrylic that ultimately saved the company entirely.

The first hints of what was to come were found in small touches across Apple’s product line in the late 90s. The Power Macintosh 8600/9600 and successor Power Macintosh G3 all had small translucent plastic touches; more heavy usage was found on the eMate and LCD display. Perhaps most infamously, there was the G3 All-in-one or “Molar Mac”, which in many ways feels like the Postosuchus to the iMac G3’s Coelophysis—superficial cousins, but an evolutionary dead end. The Molar Mac was heavy and unapologetically still a Platinum-era Mac, despite its translucent shroud. 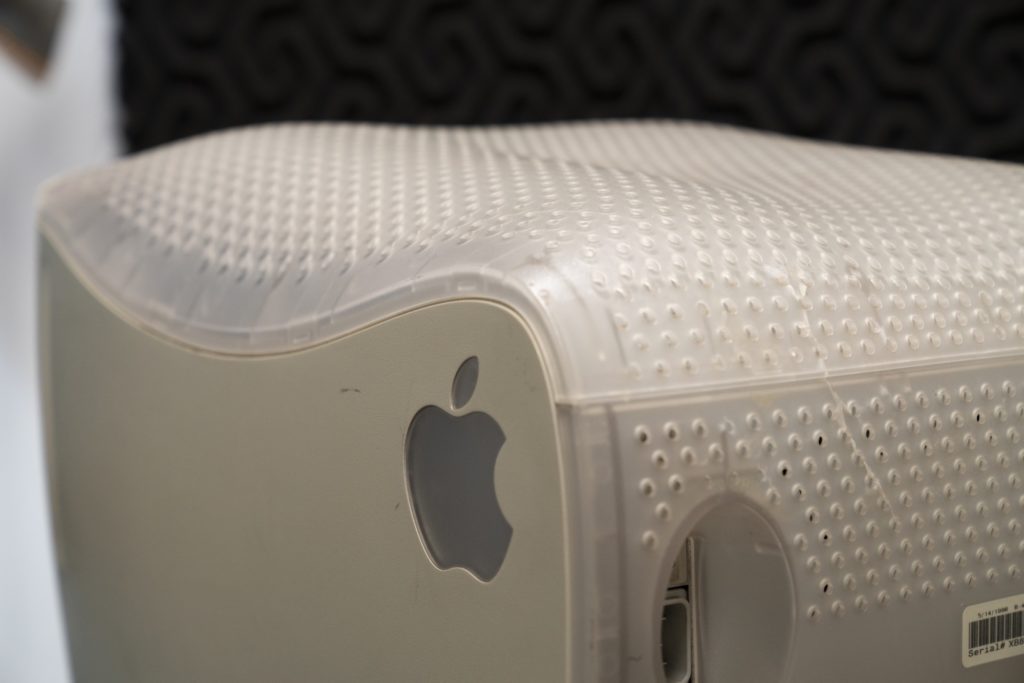 Then the Bondi Blue iMac came along, and everything changed. 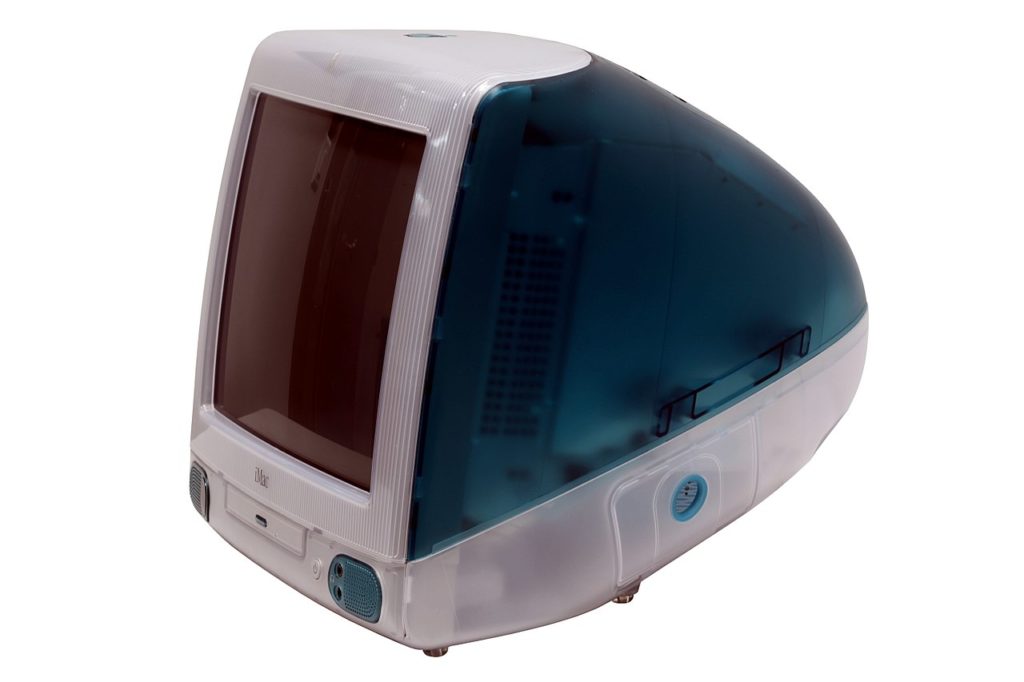 With the iMac’s success, Apple quickly moved to a completely different design language, but it was expressed in different flavors. The first short phase I’d call “smoky”. This was expressed in the original iMac and Blue & White G3, which were less translucent and more understated compared to what was to come.

The second phase was “clear”, and it was exemplified by the more transparent, more saturated colors of the later iMacs, along with the introduction of the Apple Studio Display and PowerMac G4 in 2000. The pro Macs were more restrained in colors (the early G4s had a pinstriped, vaguely blueish-grey called “graphite” that changed to a more neutral “quicksilver” in 2002) and used clear plastic prominently for handles and accents, while the iMacs went through a total of 13 variations, including the still-bananas Flower Power and Blue Dalmation, before settling down. The iMacs introduced in 2000 did have a harbinger of the next phase of Apple’s products, however—the white “Snow” color.

After this exuberant use of acrylic, Apple began a slow migration away from it. The PowerBook, which never got a clear acrylic makeover, was the first to switch in 2001 to an opaque grey metal-and-plastic enclosure—first titanium, and then the now-omnipresent aluminum. The PowerMac line would follow with the G5 “cheesegrater” in early 2003. What followed was the “opaque” phase, where Apple’s products became defined by opaque white plastic and/or aluminum across all their computers, monitors, and peripherals. In retrospect, this period seems less a serious design era on its own, and more a slow evolution to where Ive and the rest at Apple really wanted to go. The iMac added aluminum in 2007 and became fully jacketed in 2009. The Mac mini followed in 2010. The iPhone became glass-and-metal with the iPhone 4, and the final vestige of the plastic era was the polycarbonate MacBook, which was discontinued in 2011.

(Though ultimately a failed product, the Power Mac G4 Cube was perhaps the apotheosis of Apple’s acrylic Macs. Photo by BinarySequence, CC-by-SA)

In retrospect, the acrylic era really only lasted roughly five years as the predominant look of Apple’s products, but that timeframe was the key turning point for the company. It saw Apple kill its old products and start over with the simplified 2×2 product matrix, the introduction of the iPod and the very start of Apple’s iTunes empire, and the creation of the “digital hub” strategy that would define Apple until the success of the iPhone. And it might just be nostalgia speaking, but those computers still look great. While some PC makers have in recent years gotten much closer than ever before to getting close to Apple’s fit-and-finish with metal or carbon fiber computers, no one has touched Apple’s use of acrylic in the nearly twenty years since they showed what could be done, and it’s entirely possible no one ever will.

The big Apple news of last week was ruminating over the announced departure of Jony Ives, Apple’s longtime chief designer. John Siracusa opined that no one save for Steve Jobs himself was more instrumental in Apple’s renaissance in the late 90s and early 2000s, and I’d agree. While his designs have always been occasionally divisive, there’s no one in the 21st century who has had as large a role in shaping the look and feel of technology everyone uses—because where Apple goes, most other manufacturers follow.1

From the outside-in it’s incredibly hard to say how much this really matters, but I’m inclined to think “not much.” While Apple clearly didn’t want to dwell on this news—you don’t drop it late in the week for no reason—they also clearly have a plan in place for Ives’ departure, and there has always been a team of talented designers at Apple who have had to realize Ives’ visions, and who now have a better shot at realizing their own.

The punditsphere is of course filled with contradictory takes of “Jony Ive was hurting the company” smashed together with “…and Apple is doomed,” but I feel like neither approaches the truth any more than they can harmonize. Ives was ultimately responsible for design under his watch, and Apple put out some lemons—but they *always* have, and every criticism that can be thrown at Apple’s current lineup can be thrown at the Jobs-Ives golden era as well. Stripping legacy ports? Ill-advised miniaturized machines without internal expansion? Chasing thinness to the point of leaving out old features? They’re all there in Apple’s history.

Leaving aside the problems with Apple’s recent crop of keyboards (which are certainly serious, from a public relations perspective if not in terms of absolute numbers)2 I’d say that Ives will be leaving an Apple doing better than it has recently during his tenure. A large number of Apple’s deficiencies recently were in operations and strategy (a confusing lineup of products) and software (buggy yearly releases) whose connections to Ives are not directly clear. Even if they were caused by Ives, they’ve been getting steadily better. While I’m still not convinced yearly MacOS updates are a good thing, there hasn’t been a problem like borking your networking in quite a while.

More than anything, I’m excited rather than fearful. Apple is or should be too big for any one departure to irreparably harm it, and invariably you need new voices to have a chance of keeping things fresh.

Speaking of Apple’s woes, they’ve been addressing a lot of them recently. The biggest was simple: not updating their Macs. 2018 and 2019 has seen the revival of previously neglected models, as well as welcome minor spec bump and refreshes that make getting a new Mac feel like a good deal rather than fretting over when you might actually get a new product to buy.

Today was another welcome stitch in that pattern, as well as dealing with one of the most frustrating elements of Apple’s recent Mac strategy: a confusing mess of old ‘zombie’ products and overlapping offerings. Apple killed off the old MacBook Air, updated its retina replacement while dropping the price, and in one fell swoop removed the Retina MacBook Pro without Touch Bar (or MacBook Escape) as well as the one-port, ultraportable Retina MacBook (or MacBook Adorable.) Last fall there were three Macs around $1200–1300 to buy, and none of them were great—the MacBook Escape hadn’t been updated, the MacBook Adorable was underpowered (and also hadn’t been updated), and the MacBook Air was expensive compared to what you got for the money versus just buying said outdated MacBook Escape. Now, with a lower $1099 starting price, the MacBook Air carves out a better niche, and the Touch Bar model drifts down to the $1299 line instead of being a more expensive feature locked away (some people probably prefer the physical function keys, but I wager far more care about TouchID to unlock their Macs.) Given that the Air was less than 12 ounces heavier than the MacBook Adorable but more powerful and featured, its loss is not keenly felt unless you were a road warrior who absolutely prioritized size above everything. The end result is that with the new Mac Pro at the high end and cheaper portables at the low end, the Mac lineup is finally starting to shape up and feel vibrant in a way it really hasn’t since 2012.3

There’s still issues, to be sure—while the higher-end flash storage options also got a welcome price cut, getting 256GB of storage still costs $200 extra, so that’s basically a $200 increase to all Apple’s low-end products to make them decent machines for most users.4 The iMac, meanwhile, still has spinning 5400RPM hard drives standard (and the entry-level model is now the only device Apple sells without a retina display.) But it’s heartening to see that, even as its steward of the past twenty years departs, Apple seems to be course-correcting its way out of the reefs.