If you were to use a word to describe Apple’s 2019 Worldwide Developers Conference keynote, I’d pick “breakneck”. The event lasted two hours and change, but new features and huge updates were touched on briefly or thrown up on a slide in order to move as fast as possible. Aside from starting the event to tout Apple’s upcoming services and show a trailer for Ron D. Moore’s upcoming Apple TV series, the pace was relentless and the focus laser-sharp. “Here’s a bunch of new features that will make your software better, or your user experience using this software better.” Shots were fired at Google and Facebook. Long-awaited features were finally announced. And then, in the middle of it, they dropped the new Mac Pro.

Next to nothing leaked about the Mac Pro prior to its unveiling, but I wouldn’t hesitate to say that the realized product is nearly completely at odds with what I expected Apple to produce. In the wake of the much-maligned “tube” or “trashcan” Mac Pro, which suffered from thermal constraints and required all expansion to be done with Thunderbolt, I (and many others) expected Apple to walk their decision back a bit—perhaps bringing back standard PCIe slots, but making a smaller, more refined version of the earlier “cheesegrater” towers that had defined pro Macs since the PowerMac G5 way back in 2003.

Instead, Apple doubled-down on the cheesegrater. 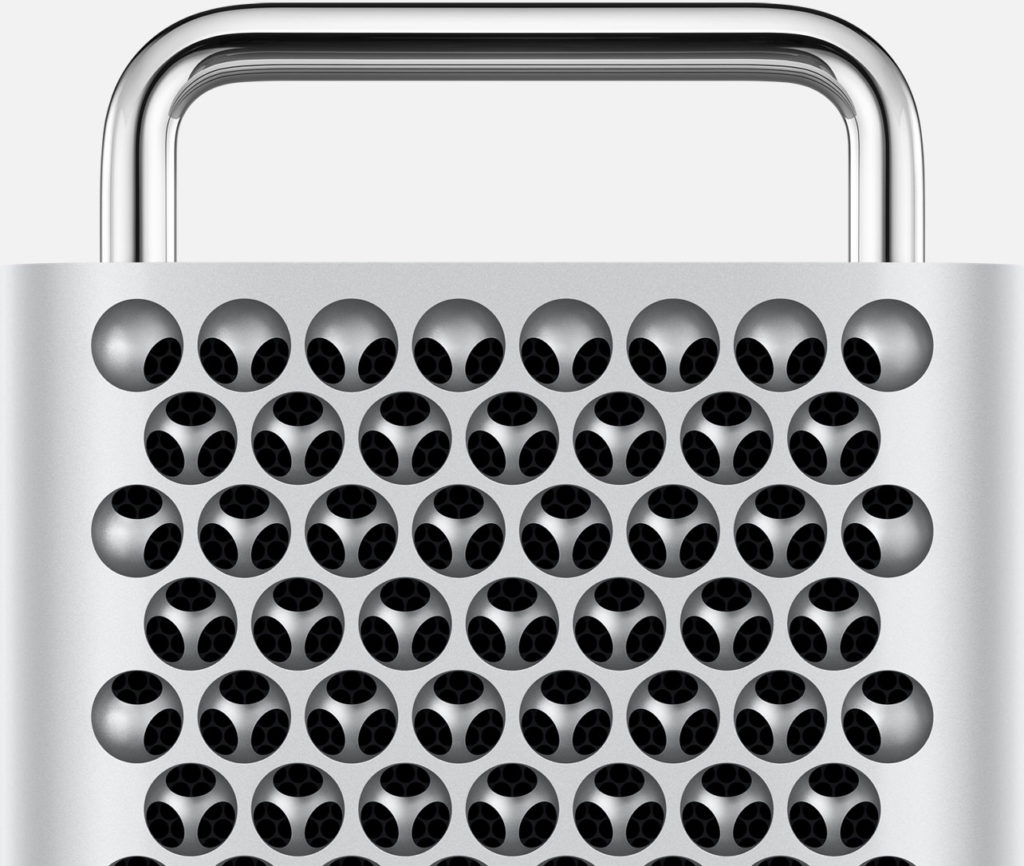 The result is a Mac Pro that is unabashedly higher-end than previous models. Whereas the last model of Mac Pro started at $2999, the new Mac Pros start at an eye-watering $5999. This isn’t just a shift in pricing; it’s a shift in ethos. Apple had previously in its modern history never made a high-end workstation tower. The previous cheesegraters were bulky and had lots of room for expansion, but they didn’t carry the highest-of-the-high-end processors, could barely support more than one GPU, and had only four PCIe slots for expansion. In comparison, the new Mac Pro is slightly larger than its elder model, comes with a whopping eight PCIe slots, twelve DIMM slots for RAM, and a 1500-watt power supply to match. The entire visual design of larger, layered holed aluminum and stainless steel supports is wholly alien to Apple’s more reserved style as of late (also curiously absent: the space-grey paint job sported by Apple’s other prosumer/professional-focused computers, the Mac mini and iMac Pro.)

The downside of this is that after seemingly narrowing the space between the Mac mini and the Mac Pro with the mini’s prosumer-focused update (shifting it ever-so-slightly more to the mythical ‘xMac’ dream), the new Mac Pro dramatically widens the gap again. A fully-loaded Mac mini configured by Apple costs $3599; this makes the gap between it and the Mac Pro step-up pretty dramatic even when compared to the rest of the lineup (where certain BTO configurations of the iMac can actually surpass the entry-level cost of the iMac Pro.) If you want a headless desktop machine with greater graphics power and you aren’t doing lucrative work with your machine to make the high cost of the Mac Pro worth it, your only real option is a Mac mini with the added bulk, cables, and complexity of external GPUs or storage added on after the fact.

As someone who would be in the market for a $3000–4000 Mac Pro to replace my old 2010 cheesegrater but is decidedly not in the market for a $7000+ machine when configured (to say nothing of the equally eye-watering prices for Apple’s new 6K display) the announcement of the new Mac Pro was a bit disappointing. It’s even further away from the mainstream power that the line originally represented in its PowerMac days, and a pivot back to the 90s ultra-expensive IIfx and its brethren. On the other hand, time will tell if Apple’s concerted effort to get back in the good graces of high-end professional computing works. There were tons of professionals clamoring for Apple to make a tower again, and now they have it. How the market receives their effort, and where the Mac line goes in the future, remain up in the air.

Overall, this seems like another year where Apple managed to make almost everyone happy. Whether you were there for Mac news or iOS devices—hell, even tvOS got Xbox and PS4 controller support, which could potentially be a huge game-changer when Apple Arcade launches—there was a lot of wishes crossed off people’s lists. It’ll be exciting to see how this all shakes out from the public betas to release in the fall.