A while back, Marco Arment wrote a piece on Mac Pro pricing trends over time. Inspired by some discussion on the MacRumors forums and the Incomparable Members Slack, I went ahead and charted all pro desktop Macs’ pricing trends since 1999. In addition, I’ve added another two lines representing the original prices in $USD adjusted for inflation to November 2017 (via CPI).

Here’s the data, pulled from EveryMac.com and the MacTracker application:

And here’s the resulting graph: 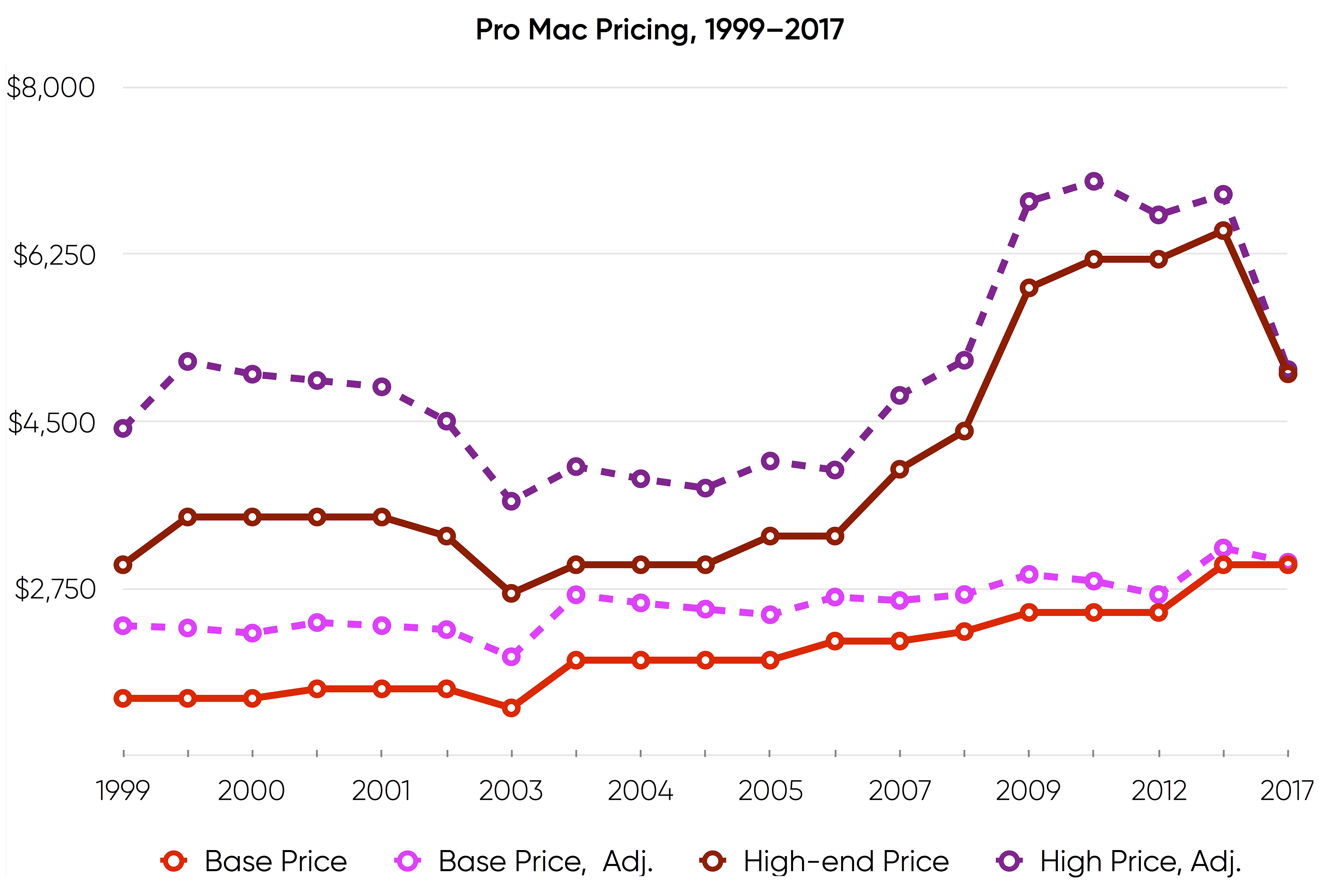 The results show that Arments’s observation that Mac Pro prices have steadily increased over time actually holds for the pro desktop lineup in the modern era, although factoring in the real dollar cost with inflation shows that it’s not as steady a slope as the unadjusted dollars would suggest. Starting in 1999 with the release of the Blue & White PowerMac G3, which had an entry-level price of $1599 (or $2360 today), the entry-level cost of a new PowerMac and later Mac Pro slowly but steadily drifted upward, to $2999 with the release of the Mac Pro 6,1 at the end of 2013. The only significant model to buck the trend is in 2003, when Apple released the PowerMac G4 3,6 (or FW 800 Mirrored-Drive Doors) at a record-low $1499 price, just six months before it was replaced by the far-more-capable PowerMac G5.

Another interesting observation—the very end of the G4 era and the G5 era is interesting in the price difference between lowest and highest processor SKUs was at its smallest; the delta has since ballooned in the Intel era.

When considering the price of the upcoming Mac Pro, it’s worth considering the wider context of the pro desktop line. When the PowerMac G4 hit the scene, Apple was at the height of its famous four-product matrix. The iMac retailed for $999, a mere $600 dollar difference to jump from Apple’s cheapest consumer computer to their cheapest pro machine. That’s a far cry from the $2500 difference today to get you from the lowly and neglected Mac mini to the less lowly but similarly neglected Mac Pro.